I love Mp3tag, but it's access to metadata fields remains limited, and I really wish I could get access to more, primarily for "cleaning" the files.

The attached image shows an example of an album loaded in Mp3tag, with the Extended Tags dialog open, and contrasted to the same album opened in Kid3 - a yech interface but a robust exposure of the metadata, which I am currently also using to clean the files. Of particular importance is both Peak Value and Average Level values - I want to (need to) remove those as they impact playback. Kid 3 also exposes "Tag 3" level metadata as well - rare but occasional, and when present almost always with adjusted playback level settings.
Anyway, that's the request - thanks in advance! 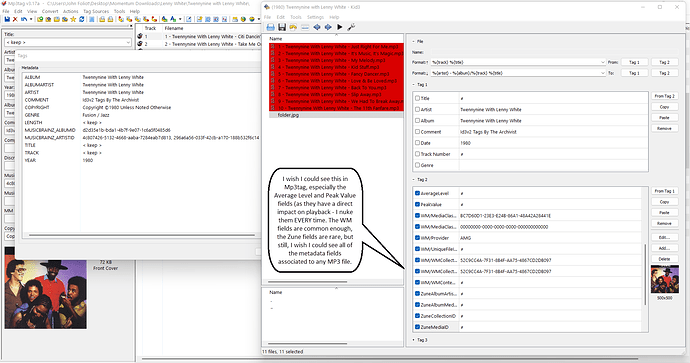 What kind of tags are in such a file?
Also APE?
Unfortunately, the extended tags dialogue does not show this info as more than 1 file has been selected.

I think you can cut and paste the whole tag for those files to remove these unsupported fields. They're written to ID3v2 PRIV frames and I made the decision to not expose those for editing (they can also contain arbitrary binary information).

They're written to ID3v2 PRIV frames and I made the decision to not expose those for editing (they can also contain arbitrary binary information).

And I guess that is what I am asking for - to re-think that decision. I find it interesting that I can add a new field (also - I believe - a Private Frame) via Mp3tag, but I cannot access or edit other fields written to the file via other tools, be they from encoders (like Zune), or other quasi-standard fields like the afore-mentioned Peak Value & Average Value (which really mess up playback across the board).

May I politely ask why you decided to not expose the Private Frame fields?

You can't add PRIV frames via Mp3tag and my decision is based on the nature of those fields being private (PRIV is short for private).

Exposing those also involves handling arbitrary binary data that cannot be rendered as string (other than being transformed to, e.g., base64 encoding). Handling those fields would require keeping track of those transformation, adding lots of internal complexity for what I find has very little benefit.

For files from questionable or unknown sources, my suggestion is to remove the tags and start anew. This way you know that only those tag fields you really want are in the files. If you want to keep what's visible in Mp3tag, you can cut the tag and re-paste it. This also solves the trouble you're having with Peak Value & Average Value (which are not standard but only relevant to a specific player and, thus, encoded in PRIV frames).

my suggestion is to remove the tags

This is what I want to do anyway (remove those tags) - I don't want to write or re-write them - but I do not see a way to remove [PRIV] tags/fields not exposed in the UI. If there is a method of removing ALL metadata tags via Mp3tag (aka start afresh), I've not found it

If you want to remove all tags from a file, see File → Remove tag. For MP3 files, it removes all tag formats that are enabled at Options → Tags → Mpeg → Remove.

If you only want to remove the fields that are not supported by Mp3tag, i.e., not available via the extended tag dialog, you can select the files and cut their tags the internal clipboard via Edit → Cut and paste the tags back via Edit → Paste.

OK, thank you. Not ideal, but workable.