Installation of 3,16b (64bit) ends with an error message 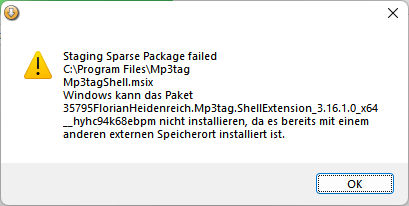 from a command prompt with admin rights?

Also, are you sure that there are no other installations of Mp3tag on your system?

And no, it is no developer's build of windows 11 but the "regular" one

What happens if you uninstall (keep your settings and create a backup) and re-install?

I'm quite sure, that deinstall and reinstall will fix it - but it's not about me. I see myself as "Beta Tester" (I guess, that's the aim of Beta Software) so I fear many others will get the error.
I installed the 32 bit in "C:\Program Files (x86)" and did only "Update" installations, so at any point it must has been moved to C:\Program Files (but not by me ;-))

Of course I will deinstall and re-install (latest with the next build) - but as said before I am quite sure it will fix this and this would mean, that we have to tell any other user, experiencing this error, to deinstal and reinstall...

OK, glad there is now an explanation for the issue you're experiencing.

I've explained the different folders and the recommended upgrade path in this post, which also mentions prior deinstallation of the 32-bit version.

The 64-bit version also uses a different view on the Windows Registry which is used to remember the previous installation folder.

Yes, I (!) know. But while beta-testing I always have the "normal", not-so-experienced user in mind and he/she won't read our posts but just "cry for help"