Less space than before for Genre in Tag Panel

I have recently updated to Mp3tag 2.91, and noticed the Genre input in Tag Panel has significantly less space than before. This is because Year, Track and Genre now have the same amount of space (one third), while previously, Genre had more space. As you can see in the screenshot, this significantly reduces usability because both text input and dropdown are cropped.

Case in point, Year and Track usually require less space. It would be really great if you could revert to the previous layout. Note: I'm aware of the changes you have previously made to improve reflow. So I hope my request is technically doable. 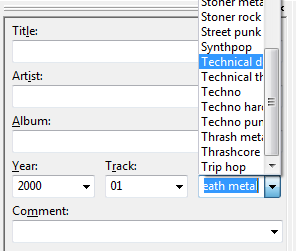 I think this may be a reasonable case for the (re-)introduction of an additional smaller field than the current 'Small' width.

With the latest versions brings the ability to change the field size of any tag field so the widths were normalized as everything is now customizable, however prior to this the Year and Track occupied half the current equivalent width of a 'Medium' (half) width field each:

Adding such an additional smaller field width would help for smaller value tags while still allowing people to keep 1/3 width fields as we do currently with the 'Small' width field (which is useful for those who store longer values for Year, etc).

Only thing one would have to keep in mind should a smaller width be implemented (for custom tag fields) would be the potential for field labels longer than like 8 characters to truncate, potentially making some labels illegible at smaller Tag Panel widths. Not a huge issue though, the user could easily adapt if they needed use of a smaller field.

Thanks for the explanations. Now I understand what the issue really is, and I also understand I'm far from being the only one pointing it.

From the top of my head, I'd suggest two additional sizes:

If there were an even smaller 1/6th width field I guess it just depends how much truncation one would want to tolerate. On the surface it seems like it'd just be half the usable width of a 1/3rd width field but with the added margins and such there's less usable space than one might expect.

For example based on the Tag Panel width in the OP and accounting for the field margin, padding and dropdown arrow the value in the OP of just the Track would actually be truncated (the stem of the 1 wouldn't be visible).

With horizontal Tag Panel layouts this would be less of an issue since it's more practical for wider column widths and generally more fields visible at once (which is why I like it), though from user screenshots I've seen over the years the majority appear to use the default, narrowish vertical Tag Panels similar to OP screenshot, which may limit its potential for general use.

Just some expanded thoughts on it. Not that I'm against the idea but also not without some notable drawbacks.

One other thing, about labels on small width fields, is there aren't any tooltips when hovering over them with the mouse to show the full label name (like Windows does for truncated filenames in a list view for example, or truncated browser tabs, etc), which is another drawback to consider since any custom label longer than a handful of characters wouldn't be readable. I think of my own custom tags for instance which only use a single character value which might benefit from shorter fields but which have longer labels. 1/4 width fields could strike a decent balance though.

I think we all agree adding the 1/4 size would be very welcome.

About the 1/6 size, it was just an idea. It combines well with other sizes, and may surely have its use cases (e.g. with large screens).

Thanks for the feedback and the helpful discussion here. Just wanted to give a quick update that I'm working on the 1/4 size for the next release. And it's really Smaller this time

Thanks for considering this. Already have fields in mind it will be useful for. Look forward to trying it.

Florian, that's good news! Thanks for listening to (and handling) user feedback, as usual

Out of curiosity, how difficult is it to implement such a new size? On the surface it sounds simple, but how about the actual code? Does it involve some complicated Windows GUI stuff?

Out of curiosity, how difficult is it to implement such a new size?

I won't go into the implementation details here. Difficulty is all relative and I don't see any benefit in going into this.

Putting it to good use

Btw just one bug I came across with it: if consecutive fields are set to the Smaller size and then one of the fields in the row is set to Small that field will expand past the margin in a fixed column (made via a Separator), rather than break to a new line. Eg: 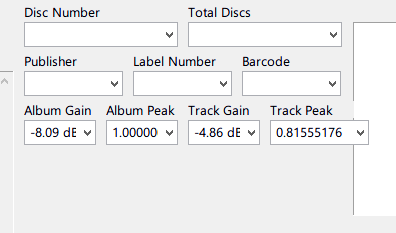 I also tried setting the Track Gain field to Small instead of Track Peak and it similarly expanded past the row margin without breaking into a new line, so it's not limited to the forth field specifically.

Comparison when set to a Medium size, breaking as expected to a new line: 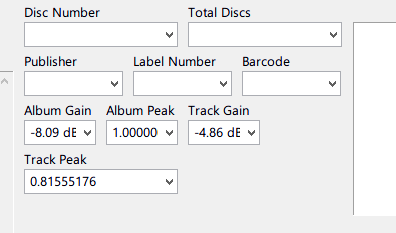 Not sure if this bug is limited only to Tag Panels with manually set Separator columns.

one bug I came across with it: if consecutive fields are set to the Smaller size and then one of the fields in the row is set to Small that field will expand past the margin in a fixed column (made via a Separator), rather than break to a new line.

I've fixed this with Mp3tag v2.91d. Thanks for testing and reporting!