In the meantime, I've already released Mp3tag v2.93 as a hotfix release for some MP4 tagging issues that were introduced with the previous version. See the end of this topic for details.

I've just released Mp3tag v2.92 and wanted to take the opportunity to detail some of the new features and changes for you.

The Tag Panel continues to get love and it now has a new field size Smaller —
which is smaller than Small. It’s perfect for track- and disc numbers and can be nicely
combined with another Smaller and one Medium-sized field to fill up one row and
use the available space in the most efficient way. 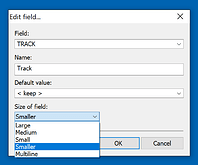 Many users who are using multiline fields on the Tag Panel (e.g., for displaying UNSYNCEDLYRICS)
were asking for a way to configure the height of those fields. It's now possible to decide on
the number of rows that are occupied by a multiline field (one row is the combination of
label and input of a normal-sized field). 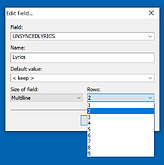 This new option gives the ability to decide of chapters are listed as separate files
or are simply not listed.
It's especially helpful if you're into editing video files (MP4 or Matroska) and
always wanted to edit the global tags of a file instead of the titles of the
individual chapters.
The option is located at "Options > Tags > Advanced" and is disabled by default. 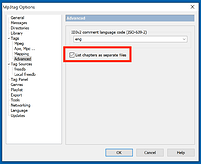 Especially if the option to list chapter as separate files is disabled, it can be
difficult to identify which files actually have chapters. I've added two new information
fields to identify those files, %_subsong_count% provides the number of
subsongs in a file and %_subsong% contains the subsong index.

You can see the new fields in action in the screenshots above. The format string used for column configuration is simply %_subsong% | %_subsong_count%.

I have the impression that more and more users are also handling their video library
with Mp3tag. This new version also has two new information fields for video dimensions,
namely %_video_width% and %_video_height% for Matroska files
(and MP4 video as well).

A possible way to use this in a column configuration would be
[%_video_width% x %_video_height%].

That was quick! I've just released Mp3tag v2.93, which fixes issues wrt. MP4 tagging. Combined with the fixes from v2.92a, everyone is encouraged to update to this version.

2 posts were split to a new topic: How to uninstall?