I've been using MP3Tag quite a bit and like it very much. Yesterday I upgraded to V2.89a and decided to enable the library feature, which as I understand it, is supposed to store the tags from a given file structure in a DB file to speed startup times.

I went ahead and enabled the feature on my library folder, which contains ~16K MP3's and it took a considerable amount of time to process. I noticed after a couple subsequent restarts that loading times were much faster.

After hibernating the machine yesterday, I find that load times are back where they were prior to enabling the feature however, and it's taking over 5 min. each time to start. I see that the DB file has been created, and it's about 65 MB in size, but it doesn't seem as though it's actually doing anything now.

Am I misinterpreting the function of the library function? Should the startup time not decrease after enabling it? Thanks for any help,

The library feature is mainly to maintain also large collections, usually more than 80k of files.
A speedier initial phase is not the primary target and actually an indication that tagging is not really necessary as nothing has changed.
If you load new files, then it will probably take as much time as before as each new file has to be read for the first time.

"On subsequent reads of the file, the metadata is read directly from the database and updated if the file's modification timestamp has been changed."

If it doesn't speed load times and lessen the processing time of all those files, I guess I'm not really seeing the point of it then? Should I just disable the feature and reclaim the 65 MB? I was kind of hoping it would lessen the 5 min loading time...

.....If it doesn't speed load times and lessen the processing time of all those files.......

It does on my system.
I just loaded 26,000 files in less than 30 seconds.
Make sure the Library is enabled, like this: 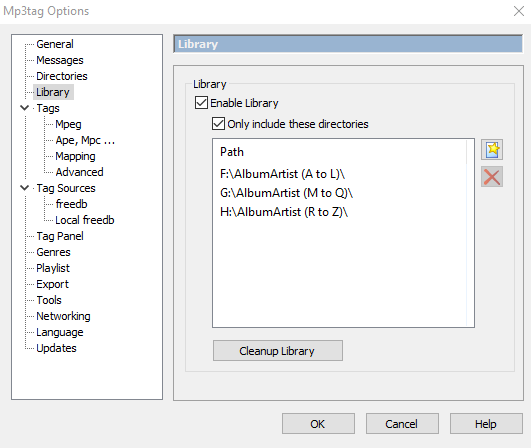 Yep, got it set up properly I believe: 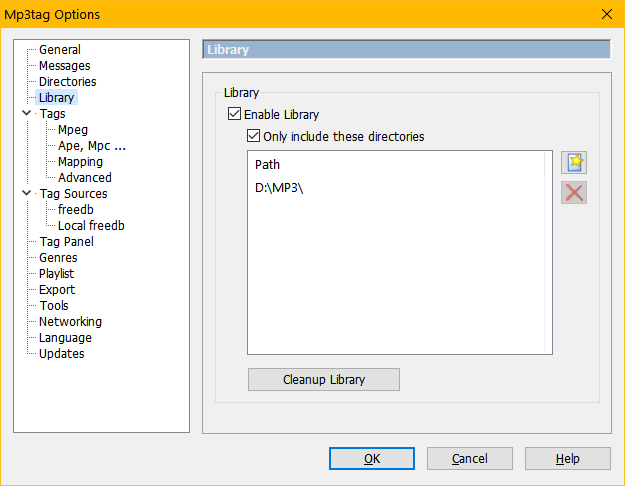 Well, the behavior has been erratic so far. I'll continue to monitor it..

Well, the behavior has been erratic so far. I'll continue to monitor it..

If problems continue, you could install V2.89b and/or delete mp3tag.db3 and then remake the library.

OK, the repeat-open performance yesterda was pretty good as long as the machine had not been shut down (ie. expected caching behavior).

I hibernated the machine again last nite and upon starting it this AM, was back to the 5+ min loading time again.

I'll try disabling the library, removing the DB file and letting it regenerate, then move on to 2.89 b or c if no luck. Thanks for the suggesitons and stay tuned!

Removed the DB and let it rebuild. Same behavior. Now when I try to cancel the 'Reading Directory; dialog on startup, it crashes.

I don't really want to go through the rigarmarole of installing the b & c versions, then retesting after shutdown, startup, etc. For me, at any rate, the library function is broken, so I'll just disable it.

Thanks for the help,