While open several mp3 files into app from m3u list file, the app should open after finish of this opearation the list of the missing files in special new window over the app main window, but since v289a that function disappeared.

I'checked the situation by reinstall and move from another machine ver. 286 and 288a—this function working properly in that versions, but after install (clean)/ move from backup (with settings) v.289a, that function disappeared again.
After finish of operating with m3u file, app shows in the columns list of available only files, the indicator in status bar shows the number of available only files.

It is a little hard to understand what you are doing.
What I guess: you can set in Tools>Options>Messages which messages you want to see. So perhaps you mean that message dialogue when you talk about

See if there are other options selected than in the other installation.

So I just created an m3u playlist, edited it manually so that it references filenames that do not exist as files.
I did not get a message box, regardless of which options I selected for messages.

What is remarkable though:
The statusbar shows the number of files that were included in the playlist (in this case 8 files) and their total duration
This came as a surprise to me.
And the statusbar also shows the number of actually loaded files (in this case 4 files) and their duration.
The file list itself only shows the 4 files that could be loaded because they had matching file names in the playlist - this I would consider as logical behaviour.

MP3tag has no function to show the missing files, yet it shows at least the number and duration in the statusbar. I think that this is somehow misleading.

Hello!
Thank you for your help, I try harder to explain the situation: 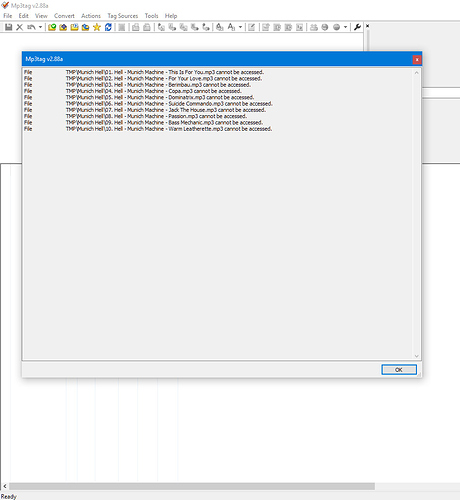 What is the problem, I receive that confirmation window as usual only in older versions of MP3Tag (here 288a), the new one (289a) doesn't display this window at the same situation (open m3u list as describbed above with some missing files on it).

Thanks for reporting and the good explanation. I've found the issue and will fix it with the next release.

I've fixed this issue with Mp3tag v2.90. Thanks again for reporting!

Thank you for this new version! After doubleclicking the new mp3tagv290setup.exe on my Win10 Pro, I get a warning about "unrecognized App" which "might put your PC at risk". This warning appears only once. Something like this [Warnung] or [Warning] It's not a big problem, just to let you know. (I know, how I can adjust my SmartScreen settings to disable this warning)