I've attached titlecase.zip (2.36 KB)
the Python script I was using with MusicBrainz Picard. The beauty of this plugin was that it followed the New York Times Manual of Style in deciding what to make lowercase or not. After exploring this and a script I found online at http://liquidparallax.com/2007/10/19/mp3ta...ollection/#titl I've modified it and created a version that's in the same spirit of the original plugin.

For the most part you can look in the attached Title_Case__It__s_a_Smart_Conversion_.zip (426 Bytes)
and you will find the lines where they specify lowercase characters to be nearly identical. So I just copied over the one from the Python script and replaced the one in the mp3tag script. It works fine and does what I was hoping for

Thanks everyone for reading this thread, I got lucky and found a script I could adapt.

This was my modification if you want to have a look
Title_Case__New_York_Times_Manual_of_Style_.zip (490 Bytes)

Hey can you guys take a look at this perl script?
I have no programming skills and thought this may not be so difficult for one of you to assist me on, the script would be useful to anyone on here as well if you can help :S

Hey can you guys take a look at this perl script? I'd like to have the same thing for use in mp3tag. ...

I want to mention, that you have offered not a Perl script, but a Python script!

What have you tried so far on your transcription of the "New York Times Manual of Style" rules into Mp3tag Scripting language and where did you realize problems? 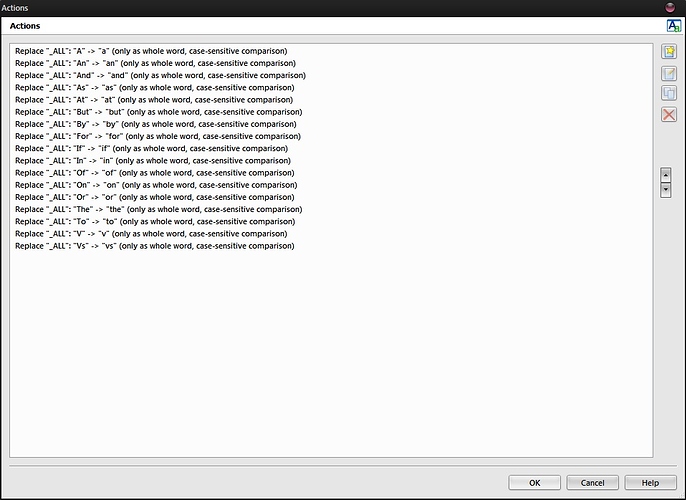 Please attach the mta files (maybe zipped) to your forum post, not elsewhere on the internet.
Do I understand it right that you got all the mta rules running without any problem?
I would avoid to use the pseudo tagfield _ALL and use instead _TAG.