I find the latest release a little confusing, I liked the previous style tag panel, it’s functional and looks good. When I installed the new version I lost my action menu, luckily I found an old back up, should it have a warning before overwriting the config files ? Is it possible to restore the previous tag panel display as per the image thanks 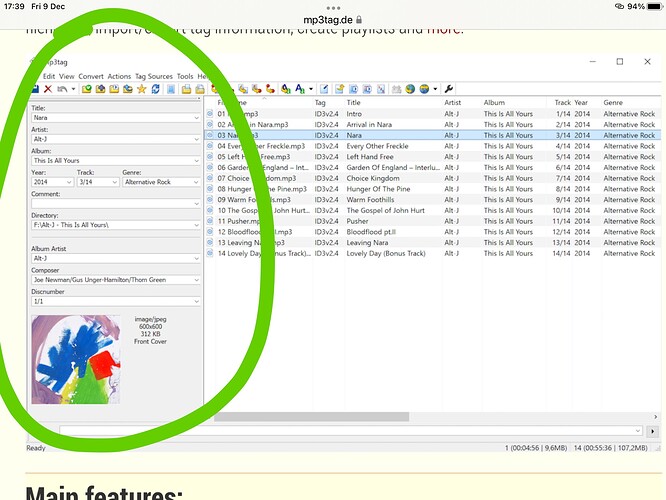 As it is not clear what kind of installation you had before, I can only ask whether you followed the hints in the extra notes:

The latest MP3tag version gives a warning - if there are any files in the installation folder or the user folder which is described here:

Details on where to download Mp3tag, Mp3tag's different installation modes, and system requirements for the usage of Mp3tag. Mp3tag is the universal Tag Editor.

Or are you on a Mac?

No on a PC W10, didn’t see the warning, I was on a slightly older version, although that’s not so important, just need to know how to restore my tag panel as in the picture, if not I’ll go back to an old version, which I don’t really want to do

I did. Put the config files over but made no difference I’ll try and post a picture if my tag panel,it has very little on it not even album artist and a few other options, it’s so bare

This part of the documentation describes how to customize the tag panel:

If you do not find your old settings then there is probably no way around it but to setup everything manually.

I tried the options to adjust it but it’s awful, can only add a few, nothing like the old layout, going back to an old version till can find a way to get the tag panel in the old style thanks

Put the config files over but made no difference

Where did you look for your old config files?

Had them saved as a backup, is there anywhere else I could look for more up to date version .?

Honestly: a simple update does not delete any settings.
So there must be some other steps come in between.
Like:
Do you have access to the old version?
Have you saved the settings of that version and stored them in a known but different location?
After you have installed the new version - which installation did you choose?
Have you opened the configuration folder and unpacked the old zip archive there?
And: I have not seen what makes the old version so much better than the new one - the screendump in the first post looks like a normal installation.
And also: how did you setup your old version so that it became like you wanted it?

Had them saved as a backup, is there anywhere else I could look for more up to date version .?

Normally Mp3Tag uses the old config-files when you install over an already installed version. If you change from standard to portable or the other way round Mp3Tag naturally can't use the old config-files but that does not mean, that they get deleted. As long as you don't uninstall the old version or delete the files, they have to be somewhere.

You mix up different things. The tag panel configuration is one part. The actions are another one.
All the configuration settings are stored in this 3 possible directories (pointed by @ohrenkino in the first answer). 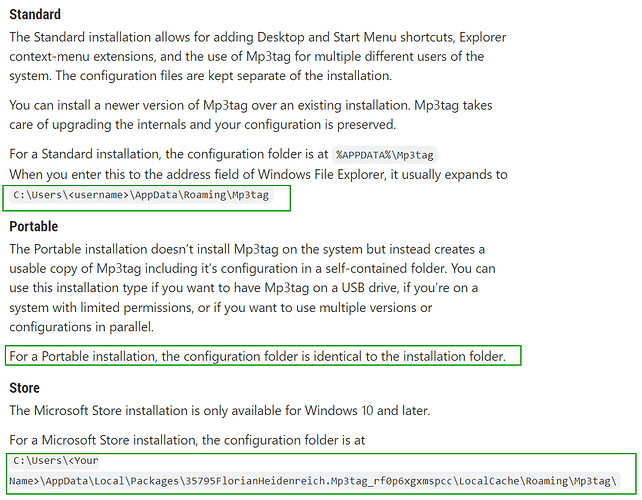 If you have a backup (not an older program version), please have a look in one of this mentioned directories.

All sired now, installed latest version and used my previous imo file thanks everyone

I installed the latest 64-bit version today and restored my previous settings and found that my tag panel only had Album Artist, Composer, Discnumber and image just like in @reddwarf4ever screenshot. I had more in my previous installation. I can't remember if the previous installation was the 32-bit or 64-bit version. I know that the settings restored, because my custom actions came in. I manually added as many of the fields as I needed, but presumably this shouldn't happen?

There is an extra folder "Panels" in the data folder.
Did you check that your definition of the panel ended up there?
Did you load the settings?

Can you upload the file usrfields.ini from your backup either here on the forum our via email to my contact address?

It would be helpful to see if this file has the additional missing fields and if so, why Mp3tag doesn't restore it as expected.

I have just checked the Mp3tagSettings.zip backup (created Sept 2017) and the usrfields.ini only contains:

That's puzzling to me, because I have always had what I considered to be the "default" fields as shown in the OP's first screenshot. In fact, until now I didn't particularly realise that they could be customised, so I know I never messed with this.

Edit: I'm not sure if this was the right way to handle resetting that back to default, but I just quit the app, deleted the usrfields.ini and restarted. The file was recreated with what look to be the defaults. I have saved the backup and this contains all the fields as I would expect.

I just quit the app, deleted the usrfields.ini and restarted. The file was recreated with what look to be the defaults.

Yes, this is a smart way to get back to the defaults.

I also might have an explanation on why you're only seeing the three additional fields: Initially, the basic set of fields (title, album, artist, ...) could be extended with user-defined fields — but not modified, re-arranged or removed). Any additional fields were then stored in the usrfields.ini.

With v2.88c (and officially with v2.89) I added the option to make all fields on the Tag Panel configurable:

This release included also a migration step for the Tag Panel configuration, so that all basic fields that were previously hard-coded were also moved to the usrfields.ini.

When you (or anyone else) now copies a usrfields.ini to a Mp3tag installation that has already performed any migration steps to the latest version (this happens on first launch), the basic fields are not added anymore.

Ah - so if someone has the newest version of Mp3tag and an old backup prior to this feature, the migration will not apply?