Hello Florian,
Is it possible for you to add support for webp image format for previews ?

Here is more info on the subject:

As VGMdbAlbumParser.inc expects .jpg or .png images but VGMdb recently switched to .webp. Hoping a fix is possible. Thanks for your dedication in...

Thanks for your support. 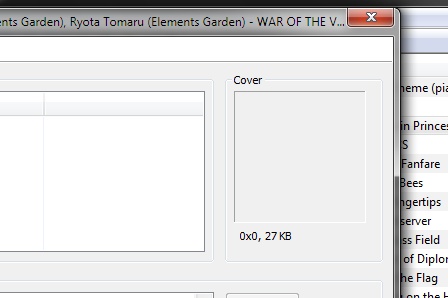 The id3 standard says this about embedded pictures:

This frame contains a picture directly related to the audio file.
Image format is preferably "PNG" [PNG] or "JPG" [JFIF].

So the question for me is: why should MP3tag support a picture format that is not suggested by the standard?

That's a bit of a black & white answer. Simply because it's not currently part of a standard shouldn't be the sole reason to not do something.

Is it popular? Is it growing in popularity? Is it likely to be part of the standard one day? Do some (many?) of your users like to use that format? Is it easy to add? Is it hard to add?

There can be many reasons to include something in a program, beyond "the standard". Luckily, we have a great developer in Florian who looks at the big picture. Well... most of the time

PS: I have no dog in this hunt. I try to use JPG all the time, and don't even know what this new format is. But as someone who wrote software for many years (old school VMS stuff), I know to always keep an open mind.

You sure have a point, that's why I specified "image previews", ideally mp3tag could convert them on the fly to png if the user decides to embed them.

My request is mainly to have working previews when image source is webp.

My reasoning behind this goes as follows:
There are so many, I don't know how many, threads in this forum that deal with the problem of players not displaying pictures. Not even the ones in a format that the standard suggests.
It is usually quite hard to find out what the particular likings of a player are and adding another format adds another variable that has to be taken care of and may be the root cause for the described problem.
So if pictures of such a format are embedded and the player cannot deal with them, nothing is won.
Adding a preview for a format that may cause problems may also be irritating if I see the picture but it does not get embedded. ANd if it gets embedded and then the player does not display it ... see above.
If other picture formats than just png and jpg become part of the standard, I bet that MP3tag will undoubtedly be updated.
Yet, the ID3 standard has been around for a long time now and modifications to a standard are usually hard to achieve.
This is just my opinion. Thank you both of you for stating your point of view.

I haven't thought much about it, but wanted to give my perspective. "Support for WebP" as in the OT can have a wide spectrum

Simply displaying the WebP image in the Tag Sources preview is most likely not a solution for the long run, because soon someone will, rightfully, be surprised why the image isn't imported in the file.

If it would be imported to the file as WebP, all the issues @ohrenkino has mentioned potentially come to effect. Also, as a consequence, the adjust cover action (which offers conversion to JPEG and PNG) would need to be enhanced for WebP as source format, as well as all %_cover_...% information placeholders and the cover window.

From my current understanding, the most viable solution to this problem is to detect WebP on import and convert it to either JPEG or PNG.

From my current understanding, the most viable solution to this problem is to detect WebP on import and convert it to either JPEG or PNG.

Yes! internally converting to jpg / png would be the solution until webp is added (or not) to the id3 standard.
Btw, for webp support in Windows Picture Viewer, Google (the dev of webp) has made a codec which can be found here.

Its just a matter of changing the file extension to .jpg, but in the web source it gets the link and if we replace the extension the parsing wont work.