Some big set of CDs contains lots of tracks from tag source MusicBrainz, such as "Bach The Complete Works (Edition Bachakademie)" which contains more than 3500 tracks. However, in MP3Tag function 'Tag source' MusicBrainz -> 'list of search results' -> 'adjust tag information', the panel just displays the first 1000 tracks, more than 1000 are gone.

Short answer:
You can't get the metadata for tracks beyond the MB API limit currently with Mp3tag and the available Tag Sources Scripts.

Longer answer:
There is an API limit from MusicBrainz. You can read about it here.
The only thing that would work, is a so called "Pseudo release". This kind of a splitted release would have to be added at MusicBrainz first.

The only "workaround" would be to try Picard, the official MusicBrainz tagging software.
AFAIK, such kind of paging was introduced in one of the latest builds (v2.8): 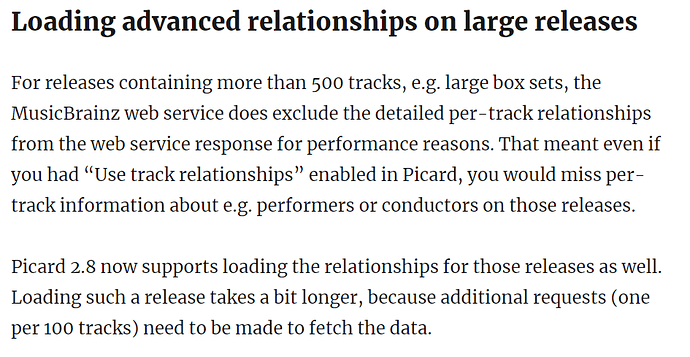 I've just tried and it takes an immense amount of memory (you'd need the 64-bit version of Mp3tag for that), but it returns all 3544 tracks eventually (you'd need to wait for some time).

The only "workaround" would be to try Picard, the official MusicBrainz tagging software.
AFAIK, such kind of paging was introduced in one of the latest builds

The official MusicBrainz tagging software Picard is badly designed in UI, I do not understand the logic to operate it. MP3tag is superior.

That solves the problem.
It takes time to finish the job.

Thank you very much!

That solves the problem.

Please be aware that this is true for the most important metadata, like track TITLE, ALBUM, ALBUMARTIST, ASIN, BARCODE, CATALOGNUMBER, ISRC, PUBLISHER, YEAR and some more.

But you don't get more specialized metadata like RECORDINGLOCATION, RECORDINGDATE, CONDUCTOR, ENSEMBLE, SOLOIST, PERSONNEL, COMPOSER and some more (only available per recording metadata) as I wrote above.