Total Track Count Tag and Artwork not displayed for FLAC

I know this has been covered before, but here goes! 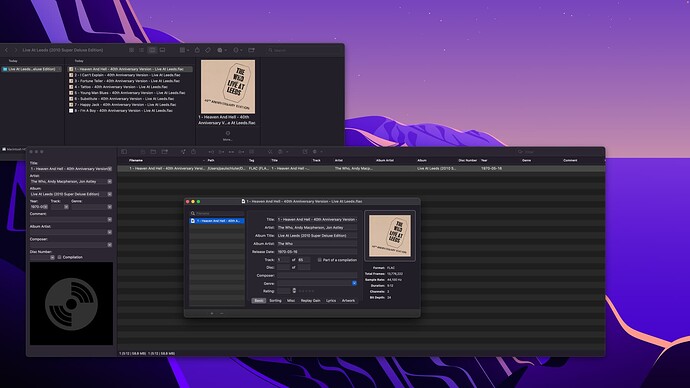 I am using Ondesoft Spotify Converter to save FLAC tracks from The Who Live at Leads album. I have simply dragged the first track into both Tag and Mp3Tag; nothing has been changed yet. As you see in the screenshot from my M1 Mac mini (Monterey 12.2), Tag version 1.0.5 by Fiesta Dog shows the track count and artwork, Finder shows the artwork (it didn't use to), but Mp3Tag version 1.4 does not show either. When I convert to Apple Lossless, the Music app will show both in its Info box.

I am curious as to why. And thanks for the 1.4 date modification/creation updates.

Not sure without inspecting the file itself, but maybe the file in question has an ID3v2 tag? You can check by making the "Tag" column in Mp3tag just a little wider.

Some apps write ID3v2 to FLAC, but it's not recommended as FLAC has it's own tagging format, i.e., Vorbis Comments.

I do not think there is much active development going on in the other Tag app I reference; its developer's FLAC player, Decibel, also displays the track (and disc) count, as well as the artwork from Ondesoft Spotify Converter (another ancient app, I believe). Yet Apple Music seems to pick up these fields.

I need to gain more knowledge on the tag differences. To quote Rodney King: "Can't we all just get along?"

I need to gain more knowledge on the tag differences. To quote Rodney King: "Can't we all just get along?"

Where would the fun be in that?

Here is a thread on how to remove the (invalid) ID3 tags from flac files:

Yes, BUT these tags seem to be recognized by Apple Music, Decibel, and I will see about Plex and BluOS today some time.

BUT these tags seem to be recognized by Apple Music

I don't think that Apple Music supports FLAC. Can you please re-check if you can import and play FLAC in Music.app?

I believe I made misstatements. Some, but not all, Ondesoft Spotify Converter's FLAC Downloads now render in Finder w/Artwork and have Track/Count in Tag and Decibel. Obviously not in Apple Music, that is where XLD comes in.

If I simply drag the .flac file to XLD, to convert to .m4a format, the converted .m4a file does NOT retain those attributes (count and artwork, at the least). But, if I force a write (by inserting disk 1 of 1), then XLD has stuff it can use to make the m4a. If Mp3Tag is used in Merge mode, the Track Count is preserved; Save removes it.

But not without going through one or the other tag writing processes, will the Artwork render in Finder, and ultimately display when played. 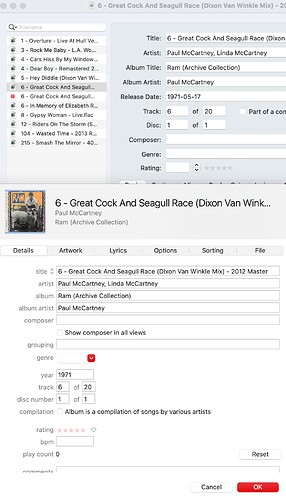 So, some of the file players will still pick up the track/disk count, artwork seems to be referenced multiple ways in the differing tag specifications.

I will continue to use a combination of Tag and Mp3Tag (as Tag's artwork is not fetched by their browse function).

I suppose I just use ancient software: Ondesoft Spotify Converter, Decibel and Tag.

I really have apprehension about any of the online file “converters” out there that grab from the streaming services. Many of these have already been identified as sources that have issues with tagging software.

Appreciate your concern. I have been using Ondesoft and XLD converters w/o issues for some years now. Nothing AT ALL is perfect. These suit my wishes.

I really have apprehension about any of the online file “converters” out there that grab from the streaming services. Many of these have already been identified as sources that have issues with tagging software.

And of course in many countries, grabbing files from streaming services and making them available outside of the streaming account is against the law. And even without regard for local law, this is theft from the artist.

Yes, kind of where I was going with this too!

I pay a monthly fee for Spotify. The download are for my personal use.

Spotify pays artists by the number of streams that can be attributed to them.
If you play the tracks locally, then Spotify and hence the artist will not get notice of this.
And as the tool chain that you use leads to invalid tags and other problems, I am becoming more and more reluctant to dig further into this topic.

I am happy to hear that The Who, The Doors, Paul McCartney and The Stones received royalties yesterday from Spotify when I streamed a few albums.

I also do not believe Macworld would provide links to purchase software if it was to be used for nefarious purposes.

Regarding the intent of this thread: I believe invalid is a very poor choice of terms regarding these tags. Perhaps they are deprecated, but after the FLAC is converted to M4A, Apple Music, for one, still supports them.

Out. Unless anyone would like to join a discussion regarding tags that can make most software happy. I will continue to use Tag and Mp3Tag to satisfy a wide variety of platforms.

Perhaps instead of expecting mp3tag to correct file formats that do not follow the expected convention, you can reach out to the developer of those programs. Ethics and/or legal discussions are irrelevant to your original topic, but not to what you can expect from other users that are asking for support from.

Perhaps you are right, my apologies

I believe invalid is a very poor choice of terms regarding these tags.

The valid way to tag FLAC files is to use Vorbis comments.
So, every other way would be invalid, I would say.

The problem with FLAC on macOS is that it's not really well supported by the system. Apple wants you to use their own lossless codec ALAC based on MP4 instead.

Finder only shows album covers for FLAC files that also have an ID3v2 tag, which is not a valid tag format for FLAC files (read: "invalid"). FLAC has its own tagging format, called Vorbis Comments. Some apps have started to also support ID3v2 for FLAC to prevent any support overhead wrt. this incompatibility.

However, I prefer to stick to the standard in this case. From the FLAC format documentation

Note however that the FLAC specification does not require compliant implementations to support ID3 in any form and their use is strongly discouraged.

It seems like you already found a solution to circumvent this incompatibility of macOS and Apple Music. You can also try Apple Lossless ALAC, to preserve the original quality of the files.

FYI: I've reported this issue to Apple via Feedback Assistant as FB9868853 Finder doesn't show album art preview icons for FLAC files tagged with VorbisComments in case anyone likes to duplicate the report.

Yes, as mentioned above, I use XLD to get the FLAC files to M4A for Apple Music. And, yes, I have found a way to make most of the world's (current) software rendering happy by storing ID3/Vorbis tags.

Thanks for taking time to see what I was saying, not what I wasn't. Good luck with the Apple assistance! Perhaps it would be interesting to submit a modification request for the Vorbis_comments field to contain disk number/count and track count?