This would be much easier to work with files, to see the details and information of files, rather than the "pop-up" Extended Tab view.

See the below generic mockup of something how it could look and be like.
(BTW, the extended tab window would of course also be on the LEFT side, replacing the standard window when selected, I just put the two windows all in one picture for ease of viewing)

Note also I show an "alternative" version of Tabs, to use "Buttons" instead. Might be easier/less work to create than creating the tabs? And of course we aren't losing "space" in that left window section either by using buttons as we would with Tabs. There's enough space in the button bar I think, so it doesn't "have" to be tabs?

The important thing is I really would like to have the Extended Tag Info section to be in that Left Window section also so it's super fast and easy to see all the info for each selected music file.

Oh, and this could even be a "setting" I'm sure? If some people like the pop-up window better?
Though, don't know why, the window just makes it harder to click through/work with files. Though, when I think about it, this new UI could still be there, and then the "pop-up" Extended view window can "still" be used for those who like that method. People don't "have" to click the Tab or Button. So, that's likely the best way to implement this?

Hope you like this idea and will improve the program accordingly... Thanks much! 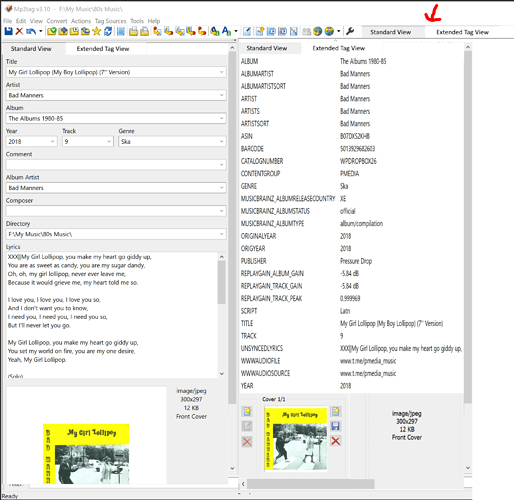 I would like the option of viewing the extended tags dialog in the tag panel instead of in a window. If this option was enabled, the tag panel could have tabs to switch between the regular and extended view (like the Opera sidebar). You could stretch the panel out if you needed to see more of the tag contents. This seems more intuitive to me and would be extremely useful as I use the extended tags dialog extensively. Please consider. Edit: Alternative thought - have a tag panel option to "Sh…

Yes, this is a similar request.... glad I'm not the only one.

I have further improved the request by showing a nice "mockup" LOL, and I've added an additional idea that might be "easier" to implement than using "Tabs" (not as much coding and designing of tabs needed), and that is "Buttons" instead.

It can work by having that for the Window that's showing that button "changes color" to indicate which window is active. So, no complicated coding or designing for tabs would be required to make this work, you just simply have the content show in the left window and implement some new buttons. weeee weeeee