Hello, I cant figure out how to edit the filename. Any assistance would be helpful. Thanks

Why would you want to edit the filename with a tagging program?
I would edit the tags and then perhaps create a new filename from the tag data.
If the filename is currently good enough for the file manager which means it is unique, then all the rest like sorting and filtering should be done by the player with the tag data and not with the filename.

I would recommend the first steps section in the help to get some assistance:

A collection of tasks with step-by-step instructions intended for novice users of Mp3tag. Mp3tag is the universal Tag Editor.

Who are you to question the uniformity of my files? The vast majority of my files are the same with exception to some files and there’s over 1000 files. That is why I asked the question of how to make the change in the first place

Here is something to look at to get better answers to otherwise rather general question:

If you need support using Mp3tag, you can help the community members that are about to support you in finding a solution or workaround to your problem, by following these simple guidelines. Be descriptive, also in what you’ve already tried Please give a short explanation what’s not working as expected or what you’re trying to achieve. It’s best to know any details about the problem at hand and especially, what steps you’ve already tried to solve it by yourself. Helpful information also inclu…

It would esp. helpful if you told us what you already have in the tags, what the filenames look like at the moment and what they should be after treatment.

You asked the question, and the answer was provided in the very next post. I think the comments there weren’t about the uniformity, but rather the methodology of how they can be derived from your tags. If the info already exists, renaming one or all of your files is pretty straightforward and is documented in that link.I don’t see anything offensive in that.

Different opinions as to what was responded to

You can likely find the solution here, using the Converter for Tag to Filename.

Documentation on Tag to Filename, a converter to rename files based on tags. Mp3tag is the universal Tag Editor.

I guess the question was based on the initial request being a bit vague, in the sense that perhaps you could have been asking how to literally edit the file name from within mp3tag. But since it was more likely you were asking how to use your tags to rename the files, and possibly folders, the Convertor is the way to go here. You can also use the Format function, but the Converter has the advantage of a preview to confirm the desired results in advance.

This is more difficult and simplistic. I’ll see if I can find something out there that's a tad easier

The vast majority of my files are the same with exception to some files and there’s over 1000 files.

This is more difficult and simplistic.

You have 1000 files to rename. It doesn’t get much easier than using the examples to rename your files based on the completed tags. You haven’t provided much else to go on to help simplify this for you otherwise. If you share what you have and what you would like it to look like, that would be a great start. 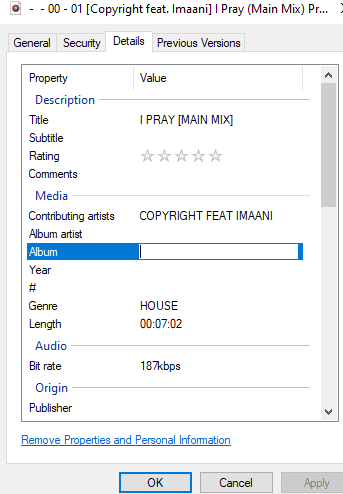 details of the file

It would have been nice to see what you already have in the tag fields.

Then try Convert>Filename-Tag
Pattern: - - %dummy% - %track% [Copyright %comment%] %title%
(If the filename looks any different, the please copy&paste it as text to the forum to show us)

After that use Convert>Tag-Filename
Format string: %title%

how do I convert all fields to upper case? Not sure what ive done to put it to all lower case

Even though you don't like already existing descriptions, the problem of case conversion has been handled in the FAQs:

How to change upper/lower case of tag fields or filenames? Create a new action in an existing action group and choose Case conversion as action type. Field determines which parts of the tags/filename should be changed. Case conversion determines how the upper/lower case of the field will be changed. If you want for example mark chars after a left parenthesis or a hyphen as the begin of a word, enter the respective char under Words begin from/after any of.

Not sure what ive done

t would still be nice for us sitting far away from your PC to get some description of what you have done which led to the described result.
If you really have imported the tag data from the filename then you can see that already the existing filename is in mixed case.

so here's my issue as you can see the file name is --00-DOJA CAT, THE WEEKEND - YOU RIGHT (OFFICAL VIDEO). The same for the title.

Also I do look at the help to try and figure it out myself though being brand new to this type of program I appreciate your assistance.

Try to import the data first with Convert>Filename -Tag.
Mask: %dummy% - %title%
There is a preview in that function that should show you the expected result.
If you do not see the right data assigned to TITLE, then the pattern in the filename does not match that in the mask.

After you have filled the field TITLE use Convert>Tag-Filename
Format string: %title%
There is also a preview. 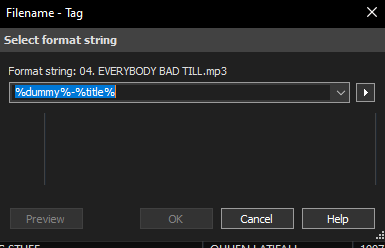 I think I'm missing something? following your steps

Your scheme has to follow the pattern in the actual file name. In this case you would have to use
%dummy%. %title%
To get the field Title
EVERYBODY BAD TILL

I think I'm missing something? following your step

As @MotleyG wrote: you are missing the dot following the number and got 1 hyphen too many.
In that respect you did not follow my steps

If you do not see the right data assigned to TITLE, then the pattern in the filename does not match that in the mask.

What would also be interesting for us, sitting far away from you:
Has it worked to import data from

?
Also, I would have expected that you would have wandered through the FAQs a little more.
As a filename with a leading number is described there as an FAQ topic.

How to import parts of the filename into the tag? Importing tags from filenames and directory names can be done by using the [Converter > Filename - Tag] Converter > Filename - Tag. The basic concept is the notion of a format string which describes the structure of the name to import from. The format string is built of either standard text (e.g., Music), placeholders (such as %artist%, %title%, ...), or backslash characters \ that denote directory structures. Here is an example that imports t…

Converters to rename files or to import tags

Here is an example that imports tags from a file name 02. Four Ton Mantis.mp3
%track%. %title%

The same example can be found in the documentation about Converters:

Documentation on Filename to Tag, a converter to import tags from file and folder names. Mp3tag is the universal Tag Editor.