Thank you very much.

Hi, Is it possible to create a second box in the tag panel for Genre which will list the genres in the selected files? ... 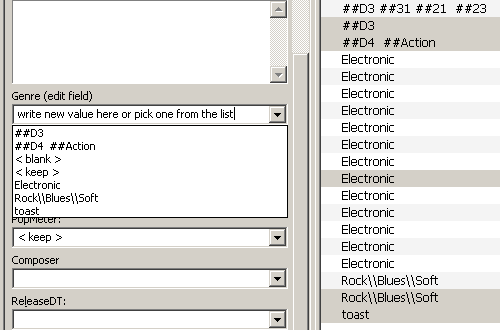 Note:
With this solution you have to write the genres manually.
You can't use the original field "Genre" to select of the list of genres.
But what you can is lookup which genres are in predefined list an take them so as orientation

Thats how I tried to do it. It will not let you do it though. When it comes to the "OK" button. Nothing happens.

In the Field box, the drop down box doesn't have "GENRE". You can type it in, but still the "OK" button has no effect, the cancel button works though!

So is this still the only way of doing it?

I'll try as soon as I've finished loading the my whole music file into mp3stag using the new database function, which has been running a few hours! I don't usually do this, but I thought what the heck, lets give this new fuction a run for the money and let it go.

It now appear in the Options>Tag Panel.

But you can Not edit it there.

Hi confusious, ... see ... Is it possible to create a second box in the tag panel for Genre which will list the genres in the selected files?
Also with Mp3tag v2.86 installed there is no problem to set up an additional GENRE dialog field within the Tag Panel.
Do select some files with different genre values and the current values are shown in the field's picklist.
If one genre value from the picklist has been selected and saved, then all selected files do have the choosen genre value.
It is also possible to edit manually a choosen value within the additional dialog field.

I can add an item via the tag panel route. As long as it's in the drop down list.

I can delete an item via the tag panel route.

I can edit an item via the tag panel route. As long as it's in the drop down list.

I can not edit an item if it was added via the ini file.

I can delete an item via the tag panel route if it was added via the ini file.

I'm more than happy doing it via the ini file as this works for me. So, as far as my original question goes, it's been answered satisfactorily.

Not being able to use the original "GENRE" to write the values is a minor irritation though. But as the selected files might well have the Genre I want, I can use the new Genre box to save the tag on the select files.

Maybe the German version of Mp3tag allows adding the second genre field to the tag panel through the options menu?

With English version I can confirm this is still not possible (OK button does nothing) and you must edit userfields.ini like in 2008. Wow, 10 years goes by so quickly!

I see the urge to get some kind of feedback about which genres are already in files.
Yet, I also see the need to get genre names that comply with the ID3 standard (and the possible expansion), so that V1 tagging is also successful.
I could imagine a solution where the genre list is filled dynamically first with the already existing genres and then the list of standard genres. Or an alphabetical list where the already existing genres are noted in bold type.

Probably the alphabetical list is the better option as you will see whether you have a typo in the genre name or not:
either you have one (e.g. hip hop vs. hip-hop) and you see 2 names for the allegedly same genre
or you see only one name which would indicate that the found name is already the standard compliant name.

As the already found genre names become part of the alphabetical list, the user would still have to scroll through the list or use the incremental search. You would not get a quick overview which genres can be found in the selected files.

If the order would be a different one like the already existing genres first and then the standard names, it would be more difficult to spot non-standard but similar names of genres.

So I would vote for alphabetical list with bold type for already existing genres.

In the tag panel there is no OK button involved.

There is no ini file envolved for user intervention.

... as the selected files might well have the Genre I want, I can use the new Genre box to save the tag on the select files. ...

This is also the reason why those fields are not listed in the field list when adding a new field. And yes, if you're entering the standard field name manually, the OK button won't allow you to close the dialog.

I'm fine with the workaround of editing the *.ini field manually — in fact, I find it to be quite creative

However, no promise is made whether this will work forever (though, I have no plans of breaking this).

I have to apologize, my memory fades: ...
in fact, the dialog "Mp3tag Options/Tag Panel" does not allow to define a dialog for the GENRE tag field for the second time.

You have to manually change something in this file: "%Appdata%\Mp3tag\data\usrfields.ini"

Doing so the Tag Panel will get the additional dialog field.

I found it strange that the Genre box worked differently from the Title, Artist, Album, Year, Track & Comment boxes, but I accept Florians view on the "why".

I have named my new box "Used Genres". I'd be happy with this box just being a none editable alphabetical listing with or without the " & " parts showing. May be not showing those two first parts would indicate that this box is a none editable list. Which would give me a shorter list than the current box. It will also list those typo's & none standard types which the current box does not do.

I know currently my new box is an editable box as it overrides and disables the original Genre box.

I could sort via Genre, but some people load their whole collection, something I've not been able to do for sometime until now, and this could take some time.

If this is to be implemented, may be an option to make it an editable box or just a list when creating the new box via the options route. Or is that to confusing or difficult to learn for most people out there.

See the (German) wikipedia page for a list genres:
https://de.wikipedia.org/wiki/Liste_der_ID3v1-Genres
What you see: for V1 tags the genres are stored as a number or 1 byte.
So there are no letters saved for V1 tags.
MP3tag has to map the letter input in GENRE to a number.
Any genre that cannot be mapped gets "Other".
So even though you know that you have hip-hop style music, a declaration with "hip hop" will lead to "Other" in V1 tags as the standard sets "hip-hop".
Even though the difference is not too big for us humans, it is something "other" for the mapping.

So, if you use a lot of user-defined genres (which are fine fon non-V1 tags), you will see only "other" when you switch to V1.

Yes that was really a rhetorical question on my part. But there are people out there that need to understand the difference between the major version of tag ID's. I just wasn't going to go that far with it, when I know there are better people out there (nod nod wink wink, you now who you are).

I'll keep my fingers crossed on a better solution to my original query.

Hmmm, those ## codes seems strangely familiar to me...