MP3Tag does not see file tags?

I have some MP3s which were cleaned and tagged by TuneUp, an old MP3 tagging software. The files have tags in them that are seen by Windows, but when I pull them into MP3Tag, the application does not seem to see any data as part of the file. Is there something I need to play with so that I can help MP3Tag see the associated data? I had hoped to organize the files with a %albumartist%\%album%\%title% ordering, but if MP3Tag cannot see the current tags, this cannot be accomplished.

You can see that mp3tag shows "Bad ID3 tag" - so please check your files first for integrity.

How to check files for errors? Howto

It’s required and often helps to reduce support cycles to check files for errors before filing a bug report. Symptoms of erroneous files are often missing or wrong bitrate or length audible blips or skips tags seem to be sticky and cannot be removed There are some really good tools to check the files for errors, namely MP3 Diags — identifies many different issues in MP3 files Website: http://mp3diags.sourceforge.net Download: MP3 Diags - Getting MP3 Diags MP3val — validate and fix MPEG …

In addition to @ohrenkino's advice:
Please update your Mp3tag version. According to your screenshot you are using v3.05. The current version is v3.12. Or do you still use Windows XP or Windows Vista?

Download Mp3tag, a powerful and easy-to-use tool to edit metadata of audio files

I ran tests in FOOBAR and in MP3val. Both scanned the files (MP3val had an issue with files that had a ► symbol at the beginning, so I would have to rename the 60 files with that, but that's not a big deal) and ran a repair in MP3Val. FOOBAR just had a scan function, from what I could tell.

It didn't look like anything was wrong with them though. Bringing them back to MP3Tag resulted in the same "Bad ID3 Tag" error.

Any other suggestions? Did I do this improperly?

Or do you still use Windows XP or Windows Vista?

People still use Vista?? I'm all updated now. Thanks.

I'd try with MP3 Diags, if it shows the file as being OK you can send a file via private link and I'll have a look at it.

Looking at the list of issues on the right, it is clear that the files have more problems than just "low quality audio" (which is not really an issue but can be set).
Any file which has unknown streams, no recognized id3 tag or an invalid one should be repaired with hammer no. 4

FOOBAR just had a scan function, from what I could tell.

Any file which has unknown streams, no recognized id3 tag or an invalid one should be repaired with hammer no. 4

I was able to run both of these utilities on some files, however they still populate with the BadID3 tags error in MP3Tag.

Is there something more I should do to address their issues?

If you click on the hammer you find a list of things that this option performs.
As your files have a number of issues, I would say it is best to treat them with as many possible remedies as possible.
Yet, MP3diags isn't the magic wand - it could still be that your files are beyond repair. 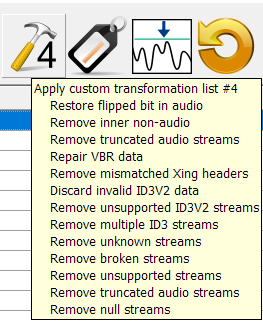 Thanks for getting back to me so quickly. I noticed the hammer buttons a minute or two after I posted.

Unfortunately, I tried to delete everything in MP3Diags to bring in some of the files fixed in FOOBAR, but apparently when you delete something from MP3Diags, it deletes the actual files and doesn't even send them to the Recycle Bin...

Luckily, they're still on my MP3 player, but I am at work, so I have to wait until I get home later to reupload them to my PC and attempt the fix again. Unless someone can tell me how to find the files I deleted from MP3Diags, but I think they're gone.

Could you tell me with which function you deleted files form MP3diags?

and doesn't even send them to the Recycle Bin... 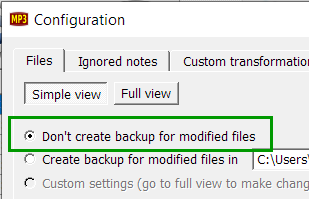 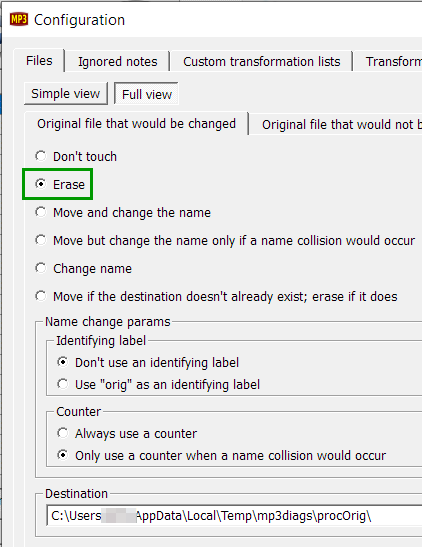 I just selected all of the files in the top frame and hit delete on my keyboard. A dialogue box came up, but I didn't think it had much text, so I hit OK, and noticed the files also disappeared from my Windows Explorer folder. And they're not in the Recycle Bin, so I guess that wiped them out. Glad I didn't test with anything important...

Sorry, I can't reproduce that.
Are you really talking about MP3diags?

Yup, just did it again. Copied and pasted some MP3s to the folder I had scanned in MP3Diags. I selected them all in the top part and hit Delete. Simple dialogue box popped up to confirm I wanted to delete the files. I thought it was just a local curation of what the app was looking at, similar to MP3Tag. I said Yes. All of the MP3 files in that scanned folder are now gone.

OK, even though I started this discussion about third party products ...
have you repaired the files with bad ID3 tags?

have you repaired the files with bad ID3 tags?

Well, I might have, but then they got deleted, so I'm starting from scratch again.

I grabbed the files off the old MP3 player and got them onto my PC. Dragged them into MP3Diags where I hit them with Hammer #4.

Then I brought them into FOOBAR where I ran an integrity check and got the following results and warnings: 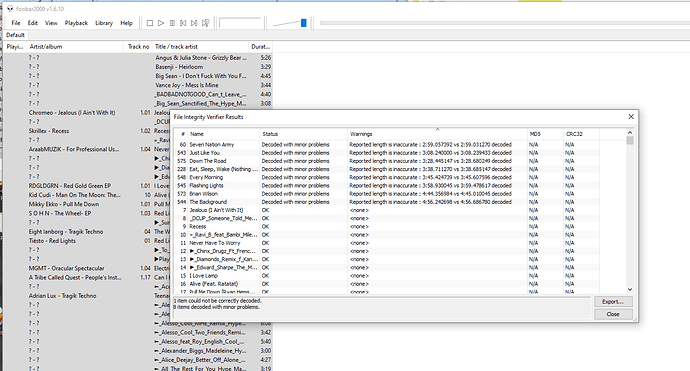 I ran a "Fix VBR MP3 Header" and "Rebuild MP3 Stream" on everything. Looks like everything has acceptable tags in MP3Tag now. However, a good number of them (probably the problematic ones from before) lost their ID3 tags in the process. Is there a good, automated way to get them back? Waaay back in the day, I used to run these files through TuneUp! Media which automatically tagged fingerprints from files from the GraceNote database, but I am not aware of anything that does that anymore. 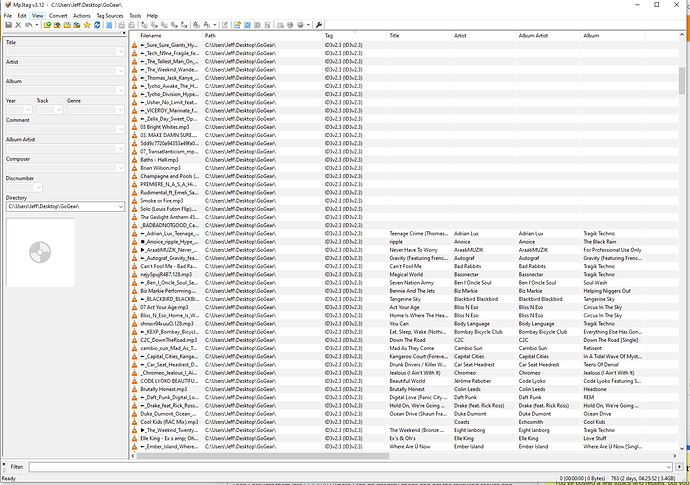 According to your original observation the files had bad ID3 tags - and now at least they have removed. So apparently, none of the tools was able to make anything out of it.
You could try to import some data from the filename with Convert>Filename - Tag.
Otherwise, I don't know.