Noticed this was taken into consideration in v2.88. Thanks for remembering, Florian

Just some thoughts on in the way it's implemented currently: it appears the fields don't flow to fill the columns depending on the height of the Tag Panel. So while they will now expand into more than 3 columns (which is great) there seems to be a fixed maximum number of fields/height for each column. 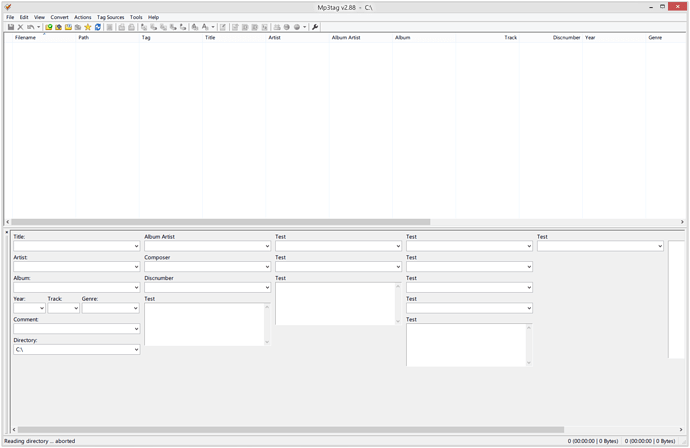 In the test above producing a horizontal scrollbar due to fields not reflowing into existing empty spaces of columns first.

Saw a new topic appear in which the OP used the tag panel at a smaller width previously (with vertical scrollbars) and they wondered if there's a way of restoring the previous layout (at least from what I can glean from translation).

Perhaps a way to reconcile the two concepts would be to always expand fields downward if there's not enough width to expand into a new column (ie: avoiding horizontal scrollbars). Just an idea I figured I'd suggest after seeing that topic.

Not sure how tricky creating such fields that flow to fit the height of the Panel and other columns as necessary would be, while also only expanding downward if there's not enough Mp3Tag window width to add an additional column, but seems like it would suit both workflows. Anyone else care to share further thoughts on this?

To illustrate the concept more visually I mocked up some examples in the browser that I took screenshots of, each with a progressively wider Tag Panel. The dark grey bar on the right represents a scrollbar.

There's also the question of how the layout could flow when there's enough width and height to fill:

Same as above but user resizes Tag Panel height to accommodate:

Or alternatively the fields always prioritize height over width when there's enough room:

Many thanks @LaurenBacall for the good ideas and the screen mocks. I'm also still thinking about the best wayTM to address this and I can definitely see that the current approach still has a lot of limitations (I definitely like it more than the endless third column in the previous version).

My preferred way of imaging the future horizontal layout currently has those properties:

This would result in a layout that

So it's a combination of your last screen mock and something that is not shown yet. Mocks 1, 3 and 4 would not be possible with this approach.

Edit: I just remembered what I was thinking about this morning. I could invent a special Tag Panel element that serves as a column break. This way, the precedence of height can be overwritten and the column break happens only at those manual breaks. A vertical scrollbar is then possible, which enable more narrow layouts with many fields that don't show a horizontal scrollbar.

Flexible width fields seem like a decent idea. A drawback with that would be some common fields like Artist and Comments might get too narrow at certain window sizes to be as easily usable as they are currently with the fixed width fields but I'd assume you'd make them some appropriate minimum width.

Not sure how a horizontal-only overflow would be received by users when there's no available room to shrink the fields (since wouldn't that also hide the cover art area until scrolled into view?) but sounds like from your edit that you've found a solution which is good to hear.

I had "The week of the Tag Panel"

This is incredible. Not only have you addressed the prior concerns but added long requested features like the ability to change the length of fields and hide defaults, among other things.

When you first mentioned separators wasn't sure how well it would work but after using it I think it probably addresses the issue for those preferring vertical scrolling over horizontal for overflows well, since it's so customizable and the user can force however many or few columns they wish. (Also since field lengths can be shortened it leaves room for more in the same space). Well done.

One main observation so far:

Many thanks for testing and the motivating feedback! Glad you like the changes

It looks like the Smaller Size of field field length is currently exactly half the width of the Normal field length but seems to not account for the margin in-between which makes them not stack side-by-side when followed by another Smaller field. I'm assuming they're meant to be able to do so like the Small length fields can but for two fields instead of three?

Correct and thanks for reporting! I've fixed this with Mp3tag v2.88d.

Thanks for the quick fix

These new changes honestly make a horizontal layout so enjoyable, and love the added touches like scaling the cover art in size depending on the panel height and adding user-customizable Alt key hotkeys to any field

What do you think I should do with regard to marking the topic 'Solved'? I'm thinking of marking your post as the solution but would you prefer I wait until a non-beta release?

Thought I'd also capture some GIFs to demonstrate the auto-flowing fields without separators, and how fixed columns look with separators, for those just reading along.

With a single separator to create a maximum of two columns only:

More separators can be added after any field to split fields following it into another column.

I am pretty impressed with the new sizing feature.
Even though I use a pretty standard vertical layout, setting small fields like LANGUAGE or BPM to a small layout really makes the tag panel look much nicer. And it saves space.

Thanks Florian. This is a real major coup in the design of the Tag-panel.

One hint:
Is it intentional that the width of the small field is different if you place 3 in a row or only 2 or 1?

What do you think I should do with regard to marking the topic 'Solved'? I'm thinking of marking your post as the solution but would you prefer I wait until a non-beta release?

It's fine to wait for the non-beta release. Thanks for taking the time to make the animated gifs — very cool explanation of the feature

I am pretty impressed with the new sizing feature.

Thanks! Means a lot

This is a real major coup in the design of the Tag-panel.

Great! Glad you like it.
Thanks for pointing to the sizing issue. There is a bunch of math going on there and I'll fix it to the next release.

If only I could have two Tag Panels: one vertical as it is and a second one in horizontal position- on which I would place my COMMENTS, TITLE and ALBUM fields with a predefined width, because they tend to by very long but some are longer than others; and then also get rid of TITLE and ALBUM from the vertical Tag Panel, so to not double the fields thus not wasting the precious space...

Is it intentional that the width of the small field is different if you place 3 in a row or only 2 or 1?

I've fixed that with the latest Development Build Mp3tag v2.88e. Thanks!

Just another improvement-suggestion that would it make a little bit more perfect for me:
Multiline boxes with configurable size would allow me to see more of my lyrics without the need of scrolling.

With the regular release of v2.89 I'm marking this as solved as it relates to the original suggestion

Of course the topic can continue to function for any comments related to the changes.

Once again thanks to Florian for taking the time and effort to add these welcome additions.

One more thing to make it complete.

Make all the fields accept user defined values as the genre field.

Could someone check this out and confirm it or debunk it:

My Smaller is actually bigger than the Small- it seems the names are simply switched. At least that how it looks like in my Mp3tag when the Tag Panel is in the vertical position

My Smaller is actually bigger than the Small- it seems the names are simply switched
[...]


I think that this either a case of semantics and / or nor being a native English speaker, which that latter one being true for me and [I assume] also for @Florian:

SMALL in less than whatever you define as being NORMAL. But SMALL also means more of something than the SMALLER amount of it


So how abut changing the order of names or even names themselves to avoid such confusions?

still would be confusing; also on the account of the biggest version being on the end of the list, after smaller ones


So how about changing this to at least


But what I would really like to see is:

Under the Tools > Options > Tag Panel > Tag Panel [area] > Edit Field [icon] > Size Of Field we can choose now the size of each and every field, which is very helpful and I thin was a long awaited feature. And so we have: Normal Smaller Small Multiline [which is, on the side note, kind of confusing: Tag Panel: horizontal layout improvements to tag fields] How about a new one: micro? It would be even smaller than the current smallest one available. For example it could be utilized …

with Mp3tag v2.90d. Thanks for the feedback everybody!

Confirmed, thank you for taking care of the core of that issue

Although I still do not understand why the biggest one [the Multiline] is at the end, after the smallest one [the Small]