There is now an actively managed fork by @araxhiel hosted on Github: 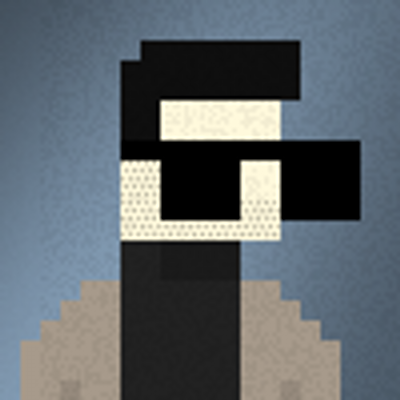 How do I install the script? / Wie installiere ich das Script?

Thank you Dano!
I hope also in future evolutions for this script.

Would it be eventually possible to modify the script that you also could enter the album number of the album you want to tag instead of using the lame Metal-Archives search engine? Would be very useful for tagging hole Bands, you just have to go to the Artist page

I have no idea how to change the script by myself

Here's an update for the new design of this site!

thank you very much!!!

Thank you for your script Dano, it's very useful when I'm trying to tag metal albums that Discogs.com doesn't have. However, when I'm trying to tag a split album, there's an annoying problem. In the title column it shows both the artist's name and the title of the song. Can I get the script to tag it properly or is it a Metal Archives problem? I don't like having to manually erase and enter the information myself. Here is a example of what I'm talking about. Thanks in advance. 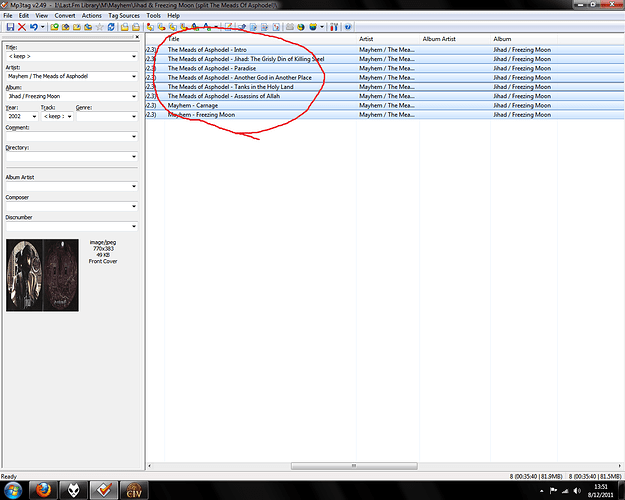 Maybe I can change the script, but for now you can also fix it manually:

In the Adjust tag information window click on "Utils > Compilation" and enter
%artist% - %title%
to split the title.

dano: maybe I'll never be thankful enough with you for this so useful and amazing web source script... but, even when I'm not so clever to made a script like this, I've come with some doubts about how it works, according to my obsesive-compulsive method to organize the music:

there is a way to get the data for genre and country of the band, and adding it to the album info, or it must be done in a separately process?

Thanks in advance, greetings!

Hey Dano, can you create a script that will allow me to search by artist name and is it possible to increase the amount of results you get?
Thanks.

I think you can get up to 200 results which should be enough. Why do you need more?

A search only by artist can also return a lot of matches. An Artist+Album search seems a better option.

That would be even better. Are you planning to add that?

Dano, thank you again for the update, your work is amazing.

Just a little detail, that I've been seeing since your previous version: how the search deals with russian characters.

If I search as is, with the cyrilic characters it gives me another results (200, as the limit says) but none is the wanted album.

I've tried with the new combination of "band + album" and gives me another 200 results...

Finally, I've tried with the "band" search.... and gives me another 200 results. Which, I must say, appears to be an expanded resultset from the above one.

By the way, I've tried with the searcher from MA page, and I find the right album with the cyrilic characters...

Any idea or a workaround? Thanks in advance.

Thank you, now it works! Well, just a detail: it doesn't get the album art 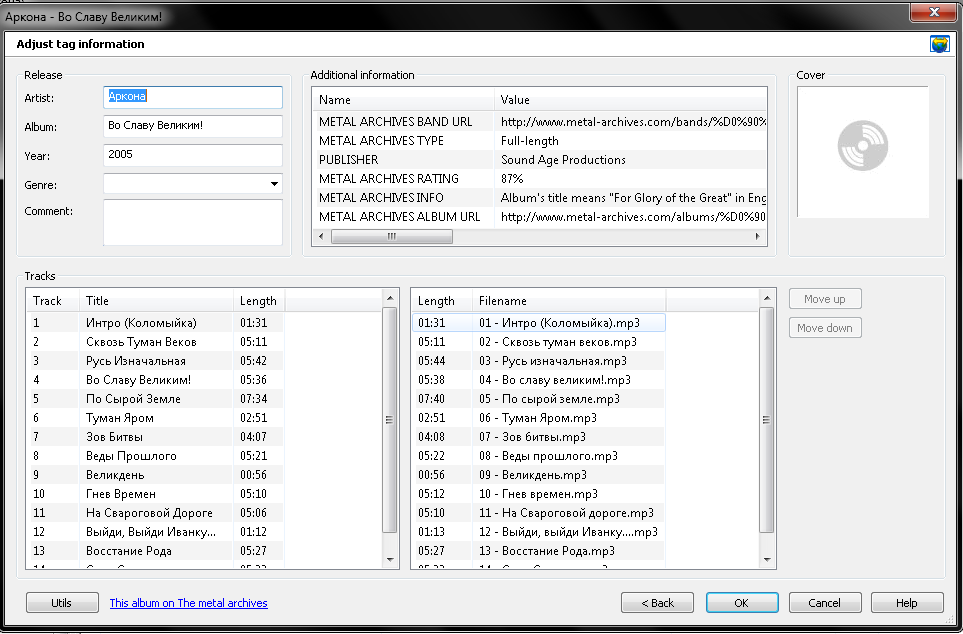 But at least now it download all the other data

BTW, just curious, which was the problem?

This is absolutely amazing.

For years I've looked for an MP3 tagger that could reference the Metal-Archives.

However, is there a way to get the genre automatically as well? Or is it a feature that is easily added? Aside from that small tag this is almost an entirely hands-off process!