I recently bought a new vehicle (2019 Ford F150) and, of course, no CD player anymore, so I've been ripping my CDs and fixing the tags on my MP3s so everything doesn't show up and "unknown". For the most part it seems to be working OK, but I've notice some peculiarites.

Hi Just joined the forum and looking for help, my music is tagged and works correctly in Itunes but when playing via USB in my car on ford sync 3 the album art is either incorrect or generic, can anyone advise please

I prepared myself (with mp3Tag obviously) collection of my favorite CDs in mp3 320, specially with cover photos embedded. On SYNC3 (Microsoft on Windows Mobile) device everything was ok. Week ago I changed SYNC2 to SYNC3 (new Ford auto-system designer by BlackBerry with QNX) and everything is ok too expecting this cover photos. SYNC3 uses Gracenote service to receive all information about played art but when this option is disapled it take info from local QDB database called Gracenote. But there…

And the weirdness continues.

So I changed "Soundtracks" to "Sound Tracks" and that seems to appease the indexer. Evil Dead II is no longer showing as having an artist of "Sneakers (Soundtrack)", but Gladiator is now. Changed the format of "S.O.D. (Stormtroopers of Death)" to "Stormtroopers of Death (S.O.D.)" just to see what it does.

It also seems to play in alphabetical order, but not all the time and not consistently, so I set up a couple tests. One with a playlist and another with adding a number prefix to the Title.

Another weird one. Albums with multiple disks.

In the truck, if I browse to Slayer, in the albums, I see "Decade of Aggression [Disk 2]" (The date prefix stripped off, but it kept the Disk 2 postfix. All 21 tracks, BUT, with the first track of disk 2 (201 - Hallowed Point.mp3) first on the list. So it seems to be doing some bazaar combination of reading the tags and physical locations.

Another one...I have both Babymetal albums. They are both tagged as such:

In the Artists list in the truck, it shows up as all upper case, "BABYMETAL" and I have no good explanation for that. One of the paths was all upper case at one point, but I've fixed that. It must be caching something and not clearing it between indexer runs.

If it's not going to read standard tags, like Track Number, what's a point of indexing it at all? It take something like 15 minutes every time I plug it in.

It appears it was Gracenote. Disabling it fixed most of the issues, with the exception og Gladiator not grouping properly with the other soundtrack. Not wure what that's all about. Maybe a corrupt tag. I'll try removing them all and readding them.

It appears it was Gracenote. Disabling it fixed most of the issues

So it's a setting in the player?
Which one?
(You see, there have been a number of queries about Ford's Sync)

There is a toggle in Media Player Settings to turn Gracenote Management off. The Gladiator issue appears to have been a corrupt tag. Redoing the tags seems to have resolved the issue. With that, all of the above issues appear to be resolved, though more thorough testing is required to make sure things like playing in the correct album order are actually working properly now. I'm not sure what Gracenote was doing. Perhaps it's just not well supported in Canada. Perhaps I'm just too picky and want the player to do unrealistic things. 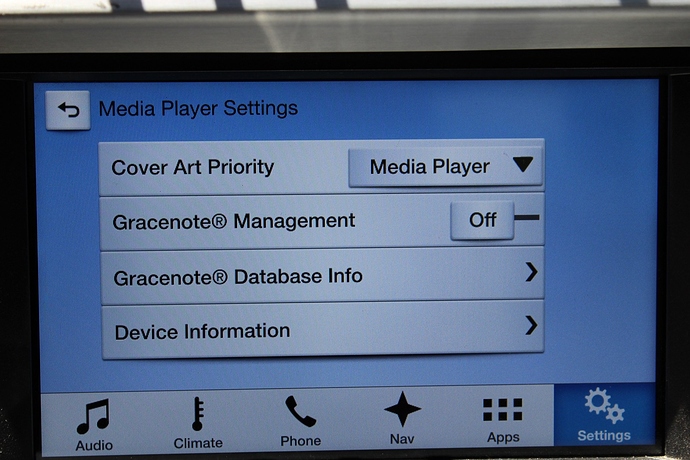